If you’re interested in using social media to engage with your customers, you’ve probably spent some time memorizing some rules about when to post on each social network. Maybe you’ve studied a chart like this one: 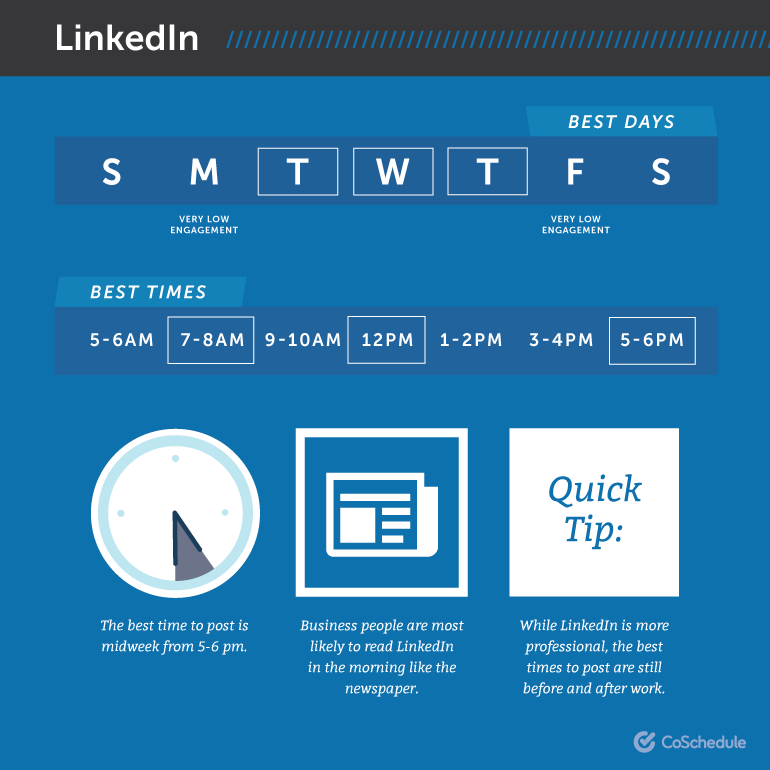 For LinkedIn, the traditional wisdom says 7a.m., noon and 5 p.m. Tuesday through Thursday are the best times to post.

As much as I like these charts, they don’t apply to everyone. Instead, I’m a big fan of sharing what I’ve proven to be true with my own data, so here it goes:

Because of the volume of content, and the behavior of users on social networks like Facebook and Twitter, timing is more important on those networks than on LinkedIn. The shelf-life of a Tweet seems to decrease every time someone writes about it. A few years ago, the shelf-life was a day or so. Now? We’re talking less than 3 hours. 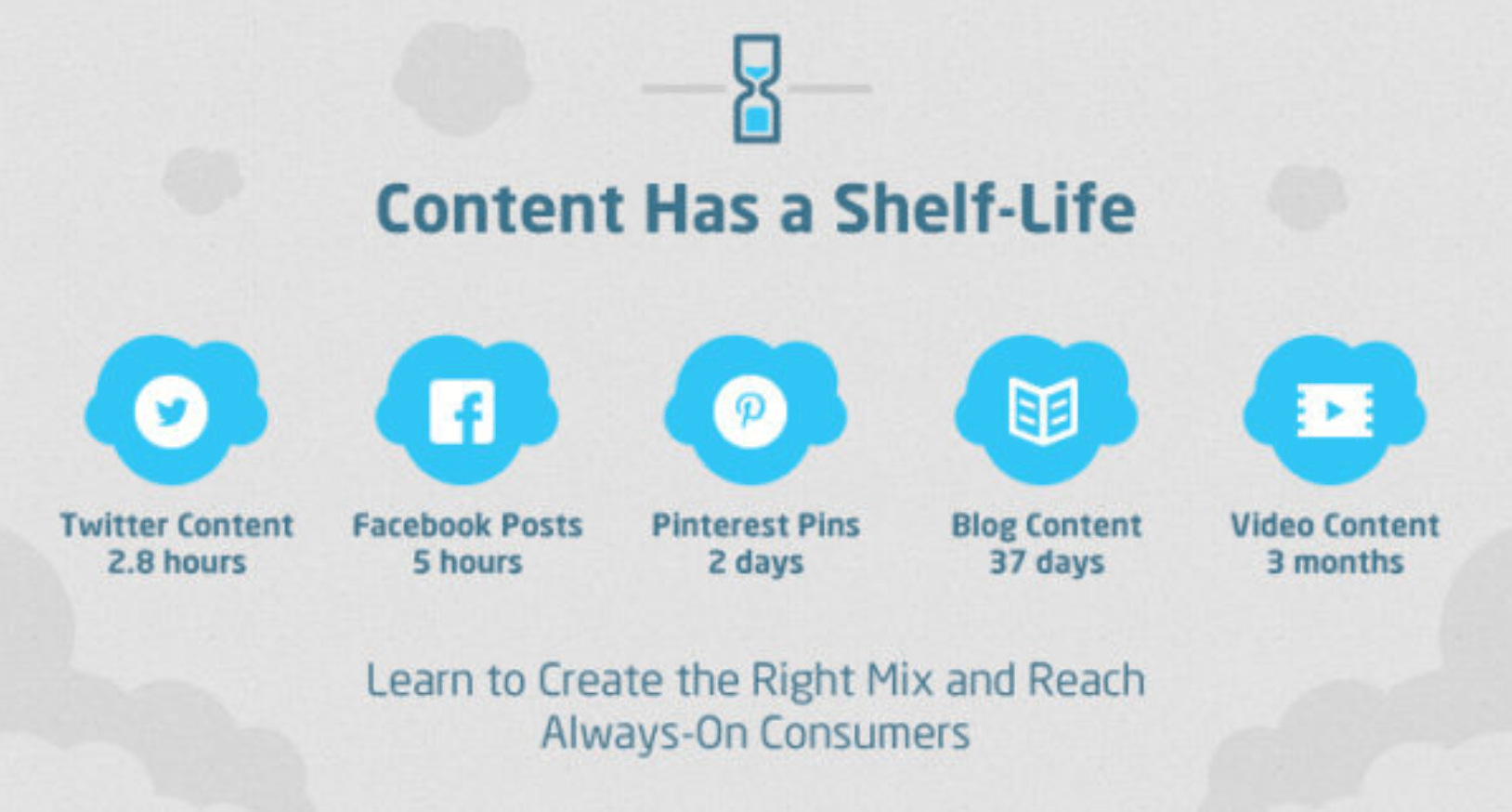 The beauty of posting on LinkedIn is that high-quality content has a long shelf-life. The most clever Tweet will be forgotten within a day at absolute best. But an original article or a thoughtful post on LinkedIn will still spark conversation and engagement for weeks after you post it. I noticed this week that I had notifications of likes, comments or shares on posts from a day ago, three days ago, and 14 days ago. My best content is still generating conversation weeks after I post it.

Why is that? I’m not an expert in LinkedIn’s algorithm, but I think it relates to the behavior of users on LinkedIn. For the most part, LinkedIn users don’t get on the platform looking to waste time. They go on with a purpose — they want to connect with people in their industry and gain business insights by reading articles and posts from business people they admire.

Unlike on Facebook, where we often feel obligated to like certain posts — your cousin’s engagement announcement, your niece’s first birthday party, etc. — there’s no obligation within your business relationships. The likes, comments and shares that you earn tend to be much, much more meaningful. Savvy LinkedIn users are looking for content that will enrich their lives and enrich the lives of their followers, so if they like, comment or share your content, you can be sure it’s not an idle gesture.

If you’ve only got a few minutes available to devote to your social media effort, spend that time on LinkedIn. The longer shelf-life of your posts and articles means you’ll get the best bang for your buck by sharing relevant content with LinkedIn’s business-savvy audience. When someone in your network engages with your content, read it as a hat-tip, a sincere thank-you, and an opportunity to start a one-on-one conversation with them.

Since content on LinkedIn tends to stick around, it’s important to share evergreen content. A user might login to LinkedIn twice a month and catch up on all of the most interesting news from her network from the past two weeks. If that includes your post, you want to make sure it’s still relevant two weeks later. In fact, you probably want to make sure it’s still relevant six months later. If someone looks up your profile and takes an interest in your latest post, she might click through to your older posts to see what other insight you’ve shared. 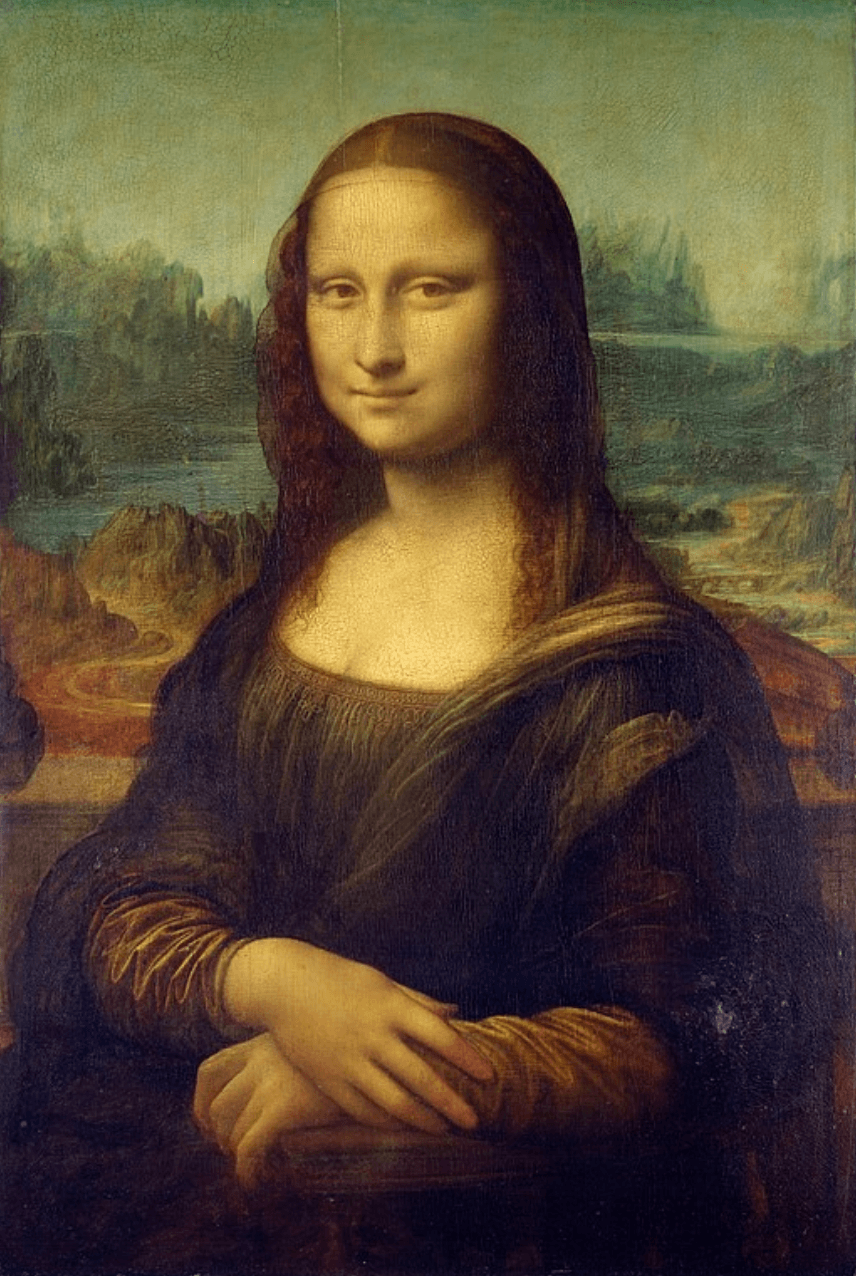 4.) You don’t have to be world-famous, just famous in your world.

A major source of anxiety for professionals who use social media? You can follow all the rules and best practices, and you can still end up with lousy numbers. The pageviews aren’t hitting your targets, you haven’t reached 1,000 followers, or your content isn’t going viral.

But here’s the thing: going viral, or becoming world-famous, shouldn’t be your goal.

Here’s a question I like to ask in training sessions. What’s the most famous painting in the world? Most people will tell you the Mona Lisa.

But what’s the most famous farmers market in the world?

You’re probably picturing the most popular one in your town, no matter where you live. Why? Because farmer’s markets can only serve people within a small radius. Their entire premise is based on selling locally produced food, so garnering national fame is completely irrelevant for them.

Your job on social media is not to garner national fame. You simply need to become well known and respected in your own circle, just like a farmer’s market only needs to be famous in its own town to be successful. And doing that is easier than you think.

Curate your LinkedIn network by connecting with decision makers and influencers in your industry, and focus on providing meaningful content for them.

5.) Things work so well that you stop doing them.

There’s an old adage in sales – “Things work so well that you stop doing them.” After doing the same activities, telling the same stories, and seeing the same people, a salesperson wants to mix it up a little. I definitely experienced this phenomenon between the years of 2008-2015, when I was averaging 16 in-person meetings per week.

This same idea applies to social media as well. Much like consistent sales meetings or steady trips to the gym to workout, social media activities compound over time. Create a schedule, stick to it, and watch as your time investment on LinkedIn becomes more and more valuable.

Which of these 5 tips do think are most important? Have you experienced anything that contradicts what I’ve found?